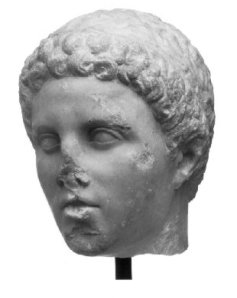 In spring 324 BC Hephaestion left Susa, where he had been married, and accompanied Alexander and the rest of the army as they travelled towards Ecbatana. They arrived in the autumn, and it was there, during games and festivals, that Hephaestion fell ill with a fever. Arrian says that after the fever had run for seven days, Alexander had to be summoned from the games to Hephaestion, who was seriously ill. He did not arrive in time; by the time he got there, Hephaestion was dead. Plutarch says that, being a young man and a soldier, Hephaestion had ignored medical advice, and as soon as his doctor, Glaucias, had gone off to the theatre, he ate a large breakfast, consisting of a boiled fowl and a cooler of wine, and then fell sick and died.

Piecing the accounts together, it seems as if Hephaestion’s fever had run its course for seven days, after which time he was sufficiently recovered for his doctor, and Alexander himself, to feel it was safe to leave him, and for Hephaestion to feel hungry. His meal, however, seems to have caused a relapse that led to his rapid death. Precisely why this should have happened is not known. As Mary Renault says: “This sudden crisis in a young, convalescent man is hard to account for.” The explanation that fits most of the facts is that the fever was typhoid, and that solid food perforated the ulcerated intestine that the typhoid would have caused. This would have led to internal bleeding, though it would be unusual in that case for death to follow quite as swiftly as it seems to have done here. For that reason, it is not possible altogether to discount other possible explanations, one of them being poison.

Hephaestion’s death is dealt with at greater length by the ancient sources than any of the events of his life, because of its profound effect upon Alexander. Plutarch says “… Alexander’s grief was uncontrollable …” and adds that he ordered many signs of mourning, notably that the manes and tails of all horses should be shorn, the demolition of the battlements of the neighbouring cities, and the banning of flutes and every other kind of music. Arrian relates an account that “… he flung himself on the body of his friend and lay there nearly all day long in tears, and refused to be parted from him until he was dragged away by force by his Companions …”, another that said “… he lay stretched upon the corpse all day and the whole night too …”, and another which told how he had the doctor, Glaucias, executed for his lack of care. Arrian also mentions Alexander ordering the shrine of Asclepios in Ecbatana to be razed to the ground, and that he cut his hair short in mourning, this last a poignant reminder of Achilles’ last gift to Patroclus on his funeral pyre: “… he laid the lock of hair in the hands of his beloved companion, and the whole company was moved to tears.” 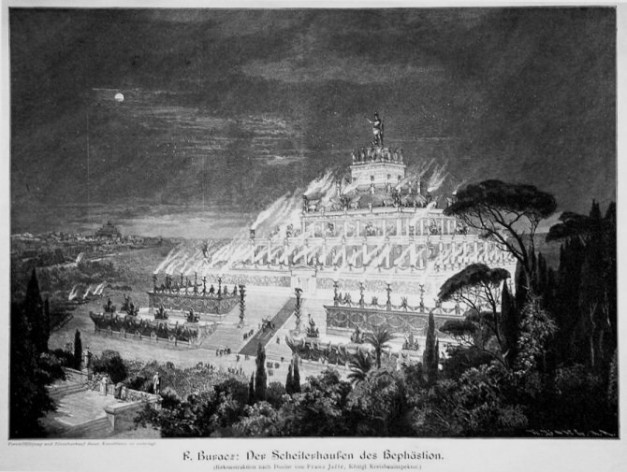 The seven stage funeral pyre of Hephaestion, based on the description by Diodorus and imitating the ziggurat shown in the background (late 19th century).

Another hint that Alexander looked to Achilles to help him to express his grief may be found in the campaign which shortly followed these events, against a tribe called the Cossaeans. Plutarch says they were massacred as an offering to the spirit of Hephaestion, and it is quite possible to imagine that to Alexander, this might have followed in spirit Achilles’ killing of “… twelve high-born youths …” beside Patroclus’ funeral pyre.

Arrian states that all his sources agree that “… for two whole days after Hephaestion’s death Alexander tasted no food and paid no attention in any way to his bodily needs, but lay on his bed now crying lamentably, now in the silence of grief.” Alexander ordered a period of mourning throughout the empire, and Arrian tells us that “Many of the Companions, out of respect for Alexander, dedicated themselves and their arms to the dead man …” The army, too, remembered him; Alexander did not appoint anyone to take Hephaestion’s place as commander of the Companion cavalry; he “… wished Hephaestion’s name to be preserved always in connexion with it, so Hephaestion’s Regiment it continued to be called, and Hephaestion’s image continued to be carried before it.”

Alexander sent messengers to the oracle at Siwa, to ask if Amon would permit Hephaestion to be worshipped as a god. When the reply came, saying he might be worshipped not as a god, but as a divine hero, Alexander was pleased, and “… from that day forward saw that his friend was honoured with a hero’s rites.”He saw to it that shrines were erected to Hephaestion’s memory, and evidence that the cult took hold can be found in a simple votary plaque now in Archaeological Museum of Thessaloniki, inscribed, “To the Hero Hephaestion”.

Hephaestion was given a magnificent funeral. Its cost is variously given in the sources as 10,000 talents or 12,000 talents. It is difficult to give a modern equivalent for such a huge amount, but we know that in Hephaestion’s time, the daily wage of a skilled worker was two or three drachmas. Today, in western Europe, 2008, that would be between £50 and £100, so the lowest possible value for 1 drachma in modern terms is £25. We know there were 6,000 drachmas in a talent, so even at the most conservative estimate, Hephaestion’s funeral would have cost £1,500,000,000. Alexander himself drove the funeral carriage part of the way back to Babylon, with some of the driving entrusted to Hephaestion’s friend Perdiccas. At Babylon, funeral games were held in Hephaestion’s honour. The contests ranged from literature to athletics, and 3,000 competitors took part, the festival eclipsing anything that had gone before, both in cost and in numbers taking part. Plutarch says that Alexander planned to spend ten thousand talents on the funeral and the tomb. He employed Stasicrates, “… as this artist was famous for his innovations, which combined an exceptional degree of magnificence, audacity and ostentation …”, to design the pyre for Hephaestion.

The pyre was sixty metres high, square in shape, and built in stepped levels. The first level was decorated with two hundred and forty ships with golden prows, each of these adorned with armed figures, and with red banners filling the spaces between. On the second level were torches, with snakes at the base, golden wreaths in the middle, and at the top, flames surmounted by eagles. The third level showed a hunting scene, and the fourth a battle of centaurs, all done in gold. On the fifth level, also in gold, were lions and bulls, and on the sixth, the arms of Macedon and Persia. The seventh and final level bore sculptures of sirens, hollowed out to conceal a choir who would sing a lament. It is possible that the pyre was not burnt, but that it was actually intended as a tomb or lasting memorial; if so, it is likely that it was never completed, as there are references to expensive, uncompleted projects at the time of Alexander’s own death.

One final tribute remained, and it is compelling in its simplicity and in what it reveals about the high esteem in which Hephaestion was held by Alexander. On the day of the funeral, he gave orders that the sacred flame in the temple should be extinguished. Normally, this was only done on the death of the Great King himself.