Alexander The Great in Egypt 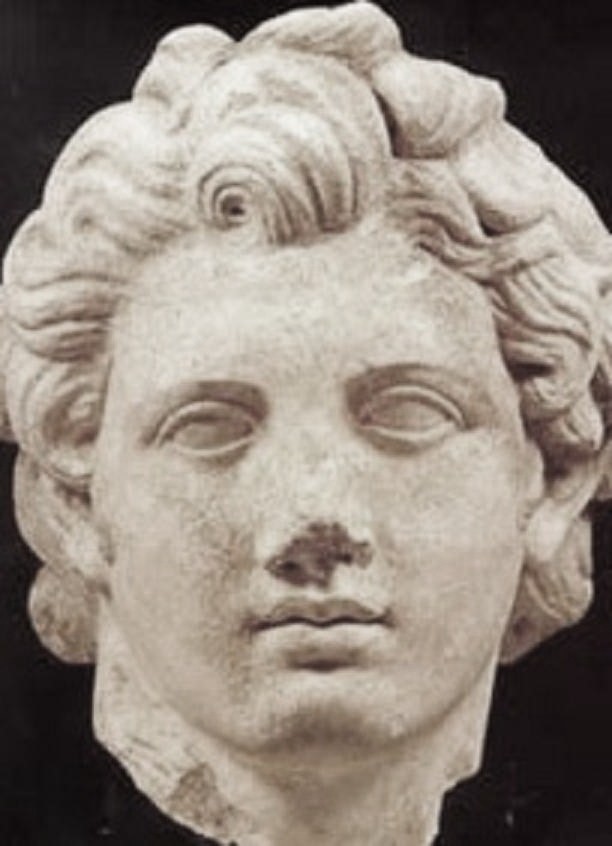 Alexander III of Macedon (356-323 bc), better known to history as ‘Alexander the Great’, spent several months in Egypt as part of his on-going campaign against the mighty Persian  Empire of Darius III. After conquering Persia’s naval bases all along the coastline of Asia Minor and Syria-Palestine, Alexander marched south into Egypt where he remained for some six months. Although generally regarded as little more than an eccentric diversion, Alexander’s Egyptian sojourn was essential to his future plans. He needed a strong coastal base for both strategic and commercial purposes, from which he could not only communicate across the Mediterranean but which could also handle the highly lucrative sea-borne trade network he wanted to divert from Phoenicia. With naval reinforcements following his progress down the coast, his Macedonian army covered the hazardous 130 mile distance in only a week to reach the heavily fortified coastal town of Pelusium in late October 332 bc.

With his reputation going before him, Alexander was met by Egypt’s Persian governor Mazaces. With no armed forces and with no likelihood of any assistance following the defeated Darius’ swift departure back east to Persia, Mazaces simply handed over the treasury’s 800 talents and “all the royal furniture”. In return he was kept on as part of the new administration together with the new governor Cleomenes, who was made responsible for finance and created the royal mint around 331 bc. Cleomenes was a hard-headed, unscrupulous businessman who quickly amassed a personal fortune of 8,000 talents during his career as governor. Yet he remained loyal to Alexander with whom he kept up a regular correspondence, sending him such delicacies as smoked quail by the thousand.  After installing a garrison at the key defensive site of Pelusium, Alexander then ordered his fleet to sail south up the Nile to the traditional capital Memphis (Ineb-hedj) at the apex of the Delta where he himself would arrive by land at the head of his troops. Passing by the ancient religious site of Heliopolis (Iunu) with its vast white temples and obelisks, Egypt made an enormous impression on both the Macedonian troops and their 24 year old leader. Brought up with his formidable mother Olympias’ tales of Egyptian gods, the religiously-minded Alexander must have been completely dumbstruck in a land so steeped in ritual, where priests held enormous power wielded inside temples not built to human scale. Passing by the great pyramids of Giza, still gleaming in their shining white limestone, he finally reached Memphis to a genuinely rapturous reception.

Greek travelers had actually been visiting Egypt for centuries, many of them setting up trading colonies or acting as mercenaries. Others such as the historian Herodotus and philosopher Plato came to study a culture they regarded with awe as the cradle of civilization, their knowledge almost certainly part of Alexander’s education. Yet for almost 200 years Egypt had been occupied by Persia who had incorporated it into the growing empire, and assuming the Egyptian crown by right of conquest the Persian king had ruled in absentia through a satrap, exploiting its vast grain reserves and taxing its people. The Persians showed relatively little respect for the ancient traditions and were deeply unpopular, and the Egyptians’ had rebelled so often parts of the country remained virtually independent.

Alexander was therefore hailed as Savior and Liberator, and as the people’s choice and legitimate heir he was offered the double crown of the Two Lands. Anointed as pharaoh in Memphis on 14 November 332 bc, the culmination of his coronation was the climactic moment when the high priest named him ‘son of the gods’ according to traditions dating back almost 3,000 years. This title deeply affected him, and Olympias’ references to him being the son of Zeus must have filled his mind; indeed, there were even scenes of the king of the gods Amun (‘Zeus’) impregnating selected queens with the heir to the throne! In a world where the gods were perceived as living entities and were considered a part of everyday life, Alexander must now have began to believe in his own divinity as a fact rather than a simple exercise of propaganda.

Always a devout man who began each day with sacrifices to the gods, Alexander had no difficulty worshipping the Egyptian deities. Equating their gods with his own, he worshipped the Egyptian Amun as a form of Zeus. At the Memphite necropolis of Sakkara the new pharaoh offered sacrifices to the Apis bull, cult animal of the creator god Ptah, followed by Greek-style games and literary contests in which performers from all over the Greek world took part in a multi-cultural extravaganza. These kind of events mark the beginnings of Hellenism in their blending of Greek practices and local traditions, and Egypt and Greece would successfully co-exist for the next 3 centuries.